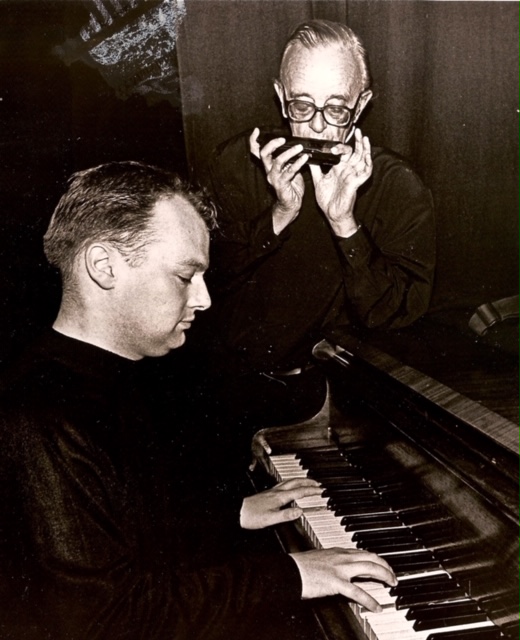 A couple of years ago I was faced with the grim task of decorating our conservatory. I was fed up with listening to Radio 4 and decided to try an audiobook.

I don’t know about you, but I had a rather strange image of them. Weren’t they for blind people? Or old people? Somehow the notion of listening to someone read a book to me belonged to an imaginary childhood “Can mummy tuck me in now?” Not only that, but my house is filled with books. Real books with dust jackets etc. I love looking at them as well as reading them, trying to keep the pages open with one hand while trying to drink tea without spilling with the other.

But I really was bored and you can’t paint with a book in your hand, so I downloaded Audible and had a browse.

For some reason, the book I gravitated to was The Water Room by Christopher Fowler. I’d never heard of either. But something in the blurb grabbed me and I lost my audiobook virginity, sloshing paint everywhere.

The book opens with grumpy Arthur Bryant – London’s oldest and most sociopathic detective – attempting to give a history talk to some tourists. It was hilarious. To my surprise, I was drawn in by the quality of the writing and also the telling by actor Ian Goodman. It wasn’t like a bedtime read at all. Goodman had created a voice for Bryant. For me, it was spot on.

I quickly devoured that radio drama masquerading as a book and went immediately into the next. I then discovered to my delight that there were 12 (I think the 16th, Wild Chambers, is out in March).

I carried on listening while I was still decorating but then immediately moved over to the print versions. By now I had Goodman’s voice stuck in my head and I scarcely needed the audiobook anyway.

But as the series has moved on I have now settled into a routine: Get the book on publication day, give it a week or two and then listen to the audiobook.

As a filmmaker, I spend a lot of time driving around the country. I quickly found that, despite being familiar with the plots, the Bryant and May books are so rich, that there is always something new to find, and they have kept me company on many hundreds of miles of motorway driving. Since discovering audiobooks via Bryant and May I have, according to my audible library, listened to about 200 books I would not have otherwise had time to read.

And I read a lot. I used to read about 2 books per week but have found audiobooks – for when I’m walking or driving or failing to get to sleep or even editing (during the quiet bits) has pushed that to about 3.5 books per week. I alternate between history, manuals, contemporary and classic literary fiction, young adult but most of all, to thrillers, crime and mystery.

I discovered this world aged 18 when, home for the weekend from college, I watched the peerless Jeremy Brett in the Hound of the Baskervilles on ITV.

Up to this point, crime played no part in my reading which was rather more Austen, Dickens and Camus. Something about Brett’s performance made me pick up my dad’s copy of The Adventures of Sherlock Holmes and I read the whole oeuvre within the month. Then I became obsessed by the TV series and bought them all on VHS. Miraculously, Brett and Edward Hardwicke also toured a Sherlock Holmes play (it wasn’t that great but to see them perform the characters in real life was incredible). I was about 20 at the time and I remember meeting them both outside the theatre where they signed one of my VHS sleeves. It currently sits on the piano in my edit suite.

From Holmes it was straight into Chandler, Christie and the rest.

I love them all. Chandler was as good a poet as anyone and Conan Doyle knew how to churn out an atmospheric but ludicrous plot like no other.

Later I came to admire Colin Dexter’s Morse books too – and like all my favourites – adored the dramatisation of them. John Thaw’s Morse is one of the best performances I’ve ever seen.

So in this sense, coming to Bryant and May via audiobooks was just the latest in a long line.

Except, like watching Daniel Craig as Bond, after a lifetime’s advocacy of Sean Connery, the best came last.

The Bryant and May novels are the wittiest, most erudite, beautifully plotted and characterised crime novels I’ve ever read. And I’ve read many hundreds.

They tell the adventures of the titular detectives, who head the Peculiar Crimes Unit, a specialist unit within the Met dealing with cases which might harm public morale or are too weird for the normal police to deal with.

When I first started reading them, I almost believed they were supernatural fiction. The cases are so out there and the range of people called in to help the detectives – wizards, white witches etc – give that impression. But of course John May is a beautiful sceptic and Arthur Bryant is more interested in wisdom and seeing things from a different angle than a believer. There is no supernatural element to the crimes. Just a lot of fringe characters who dabble in it.

Like Morse before him, Arthur is hugely well-read and sprinkles his speech and thinking with classical allusions, which keeps you on your toes. I’ve had to pull an encyclopaedia out more than once after finishing up a Bryant & May as I need to find out a bit more about such and such piece of Greek mythology.

But it’s the interplay between the two and their ineffectual Acting Head, Raymond Land, that makes these books a total joy to read. I’m a huge fan of PG Wodehouse. I must have read 50 of his 90+ books and some of them a dozen times (I’m looking at you Blandings). Fowler somehow channels Dickens, Wodehouse and Dexter into a new totally unique creation.

He also manages to make London itself the third main character across the books. If, like me, you have more than 30 books in your library on the history of London, know your Crutched Friars from your Blackfriars, then these books are truly manna from heaven.

But then, here’s the real mystery, nowhere near enough people know about them.

A few of my friends who love books too are also huge Bryant and May fans. My mum practically thinks of them as her best friends. But I’ve had to recommend them to far too many people who respond with shrugs and quizzical looks to fail to understand that they haven’t reached the level of recognition of a Rebus or Morse. I’ve been forced to watch New Tricks and it’s a galling mystery to me that that programme has millions of viewers while the best crime out there still hasn’t been made into a series.

I subscribed to Chris Fowler’s blog – he’s entertaining on other subjects too – and discovered there that the series had been optioned and at one point Derek Jacobi and Michael Gambon were lined up to play the leads. But that doesn’t look like ever happening.

When I’m not writing, I’m making short films mostly. I spent many years working at the BBC, ITV and Channel 4 making programmes, and it is a complete mystery – not to mention annoyance – that none of the main terrestrial channels have taken this option up. I hope whoever has the option has taken notice of Netflix’s emergence as a great originator of interesting drama. It has to be done.

I’m also a musician and composer and one day imagined what a theme tune for Bryant and May would sound like. I wrote something on the piano and ran upstairs to my studio and within a day or so, had demo’d it. I put it up on youtube and sent it to Chris (who I had never met). He liked it and it was nice to see so many views and comments. Like a lot of demos you end up not being able to hear it done differently so I’ve just left it as it is, bum notes and all.

This led eventually to my meeting Chris at the launch of Strange Tide and we made a little film about the launch.

So right up until this point, Bryant and May have been nothing but a blessing.

It doesn’t share much with Bryant and May in terms of characters, setting or plot but I did feel hampered by my love of them. I tried to analyse what it was and realised it’s the author’s voice. I suspect Chris and I have read many of the same books and we also come from a media background. Very different voices, but a lot of the same references.

Which just goes to show how difficult influences can be. You have to absorb and escape them at the same time. I wrote a very long outline (I really didn’t want to muck up the plotting on a first novel attempt) but realised that I had to work hard to avoid sounding like the meshing of Wodehouse, Dickens, Austen, Chandler, Dexter and – yes – Chris Fowler – that my literary head actually is. I love Nordic Noir. I love James Ellroy. I love Michael Connelly. But I don’t hear them in my writing. I never speak like them. They don’t do absurd or surreal, whereas I’m a child of the Beatles, Monty Python and the Bonzo Dog Doo Dah Band.

Now it’s done, I do feel I found my own voice but you might notice I have a Wodehouse-ian desire to get at least 1 unique similie on every page.

We’ll see what readers think, though reviews have been positive so far.

In the meantime, I have only a few months to wait until the next Bryant and May is out. Please god don’t let it touch on any of themes in my thriller, Dead & Talking.